Back in October I went to see a production of Shakespeare’s Richard III at West Yorkshire Playhouse. Previous experience has told me that a bit of basic historical knowledge can really help your appreciation of The Bard’s genius, so over the autumn I found myself reading up on Richard’s reign and the whole War of the Roses period (1455-1485). It didn’t take too long to realise that many of the key events of the time took place around West Yorkshire, and that many of the key sites can still be visited today.

And perhaps the most significant event of all was the Battle of Towton, which took place on 29 March 1461 (or 555 years ago today if you prefer). Historical opinion seems to vary on the exact scale of the battle, but clearly tens of thousands of men were involved, of which a very high proportion died, and the Yorkist’s victory over the Lancastrians dictated national events for the next 24 years. Visiting the battlefield today, the Towton Battlefield Society has created an excellent 2-mile Battlefield Trail which manages to combine a full interpretation of events into (perhaps ironically) a pleasant country ramble, which is described below.

Allow up to 2 hours to complete the full circuit. Most of it is around fields but a map is not really needed as the Trail is clearly marked and easy to follow. The route is flattish with a few undulations, and although I went when it was bone dry some parts could get muddy, so choose footwear accordingly. 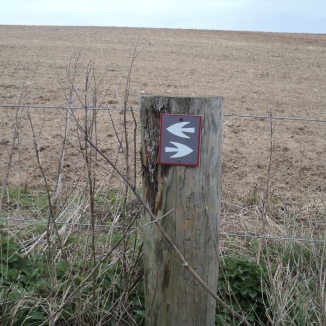 Start at the lay-by next to the memorial cross on the B1217, half a mile south of Towton village, which itself lies 3 miles south of Tadcaster. The trail is divided into 2 sections, each section covering the 2 main phases of the battle. What becomes immediately obvious is how the geography of the landscape around you helps your understanding of the turn of events. The first section is a simple “there and back” of half a mile which takes you to the first of 10 interpretation panels that line the route. At the cross, you are on the line of the Lancastrians’ position at the start of the battle early in the morning. Ahead of you is a minor vale, with the horizon 200 yards away being the Yorkists’ initial line. So, much of the day’s action (and it was a full day, which partly accounts for casualty figures) took place right where you’re walking, a sobering thought.

Returning to the cross, the remainder of the route covers the ground of the Lancastrians’ retreat and ultimate defeat. Late in the day of the battle, Yorkist reinforcements arrived which turned the tide in their favour. This put the Lancastrians to flight, but while the initial phases were fought on relatively flat ground, the line of escape was down into the valley of the Cock Beck. Many of the retreating soldiers met their grisly end trying to cross the Beck (which was swollen by falling snow). From Panels 4 and 5 you view the so-called “Bloody Meadow”, which tells its own story. The Trail follows the edge of the escarpment, so it is easy to imagine the difficulties the retreating soldiers faced. 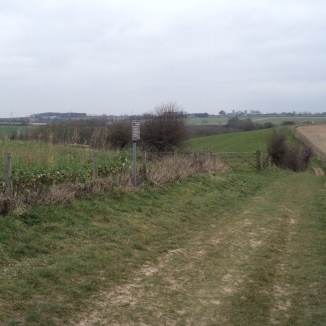 After a mile of easy walking along a green track, passing more interpretation panels, the route enters Towton village where refreshment is available (when open) at The Rockingham Arms – you might need a pint by then. The remainder of the route follows the road back to the starting point, although happily most of this is on a path to the side of the road, which makes the route possible not just for grown-ups but for families with kids as well.

In closing, when I got back to the car on this particular chilly March day in 2016 I reflected that all I really had to worry about was how long it would take for the heater to kick in and for my feet to warm up. The soldiers on that snowy morning in March 1461 faced a somewhat starker reality. Perhaps we can’t be reminded too often how lucky we are to live in such relatively peaceful times.

One thought on “Towton Battlefield Trail”