In my last blog I mentioned I’d started “collecting” 13 local trig points (“pillars”, strictly speaking), as one of many ways of keeping running interesting during Lockdown. Well, all 13 are now in the bag. So, I thought I should “report back” on what I’ve found. Both to give a flavour of the current condition of these iconic (but sadly redundant) landmarks, and also to reflect on whether the act of searching for them was worth all the bother.

I list the pillars below in alphabetical order. All were visited on a run from home and appear on the 2000 edition of the OS 1:25000 map of Leeds South (slightly trimmed to fit into a frame).

I live somewhere near the centre of the map and, on average, it took around an hour to run to each pillar (well within my comfort zone). Of course, physical distancing was observed at all times. More information about the pillars – location, reference number, visits by others etc – can be found on the TrigpointingUK website.

Well, the obvious sad fact is that only 6 of these 13 are in good condition and accessible. The remainder are either toppled, inaccessible or destroyed. And now that pillars no longer fulfil their original function – OS mapping has been done digitally since the 1990s – there is little that can be done, legally, to protect any under threat. Indeed nationally, there are only around 7,000 pillars left out of the original 10,000. A shame, because they have historic and educational as well as sentimental value. I guess the best suggestion is to continue logging visits on TrigpointingUK, sharing photos on social media etc, to at least keep their profile up. The COVID Trig Point Challenge! group on Facebook does this admirably. 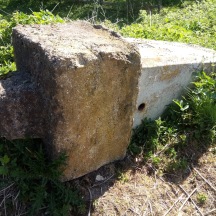 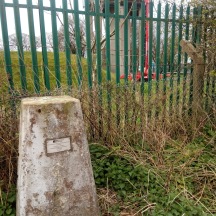 On a more positive note – and while it’s of course disheartening to run several miles to visit a pillar only to find it’s disappeared under a bulldozer – the act of hunting down the trigs has been a real find under Lockdown. Mainly because, it’s made me visit places I would never otherwise have gone to. I don’t think I would have thought of going for a run around Castleford or Belle Isle, for instance, but I got to visit the birthplace of Henry Moore in the former, and the wide roadside verges of the latter were perfect for physical distancing. The abandoned golf course in Middleton Park was another good find for the same reason, plus I got to see the park’s famous carpet of bluebells. One of the more eccentric discoveries was the curved, pitch-black 100-yard tunnel by Parlington Hall, built by the rich nobs in the 19th Century to keep the hoi polloi out of sight as they passed the hall. Next time I’ll remember my head-torch!

Only problem now is – all 13 done, so what next? Lockdown looks likely to continue. Maybe Blue Plaques – there’s 171 of them in Leeds. Follow me on Strava to see my latest bright ideas.

Meanwhile, while tackling the pillars of south Leeds, there’s been some renewed interest during Lockdown in a north Leeds trig challenge I come up with 18 months ago, when I lived on that side of the city. Including an appearance on local radio! Read to find out more about the Meanwood Valley 3 Trigs Challenge.