I’ve blogged before about Burnsall’s renowned history and records, but what stood out today for me were two things. Firstly, the particularly good atmosphere and friendly banter between runners before and after the race. I got chatting to a couple of lads while recce-ing the course beforehand who were only too willing to share their route-choosing tips and reminiscences of previous races. Eg, we decided that keeping to the left of the tree straight after the wall on the descent was the best bet – I think this was proved correct! Good to give the “lower” half of the race a proper recce on the day as strictly-speaking it’s out-of-bounds the rest of the year.

Secondly, loads of chat at the finish line about just how good a course it is, and I have to agree. It’s got a bit of everything squeezed into its 1.8 miles. The initial runnable climb, the steeper bit near the top where you have to walk, a proper wade through heather, the awkwardly steep (and today, slippery!) initial descent, the wall to hurdle and then the exhilarating rush down to the finish. And only 50 yards of road at the beginning and end (albeit with loads of spectators!). It’s like all the best bits of fellrunning neatly packaged into 20 or so minutes.

You can toy with a few tactics too, although probably more of an issue for better runners than me. I made a daft effort to get ahead of a few just before the wall on the climb – knowing the difficulty of overtaking from then on – and almost came to a complete stop straight after and lost all the places again! Further on, some near me on the descent tried their luck on the heather rather than the path – not sure it worked for them though.

So overall, great day, sure I’ll be back next year, and many thanks to all the organisers and volunteers that make it happen. 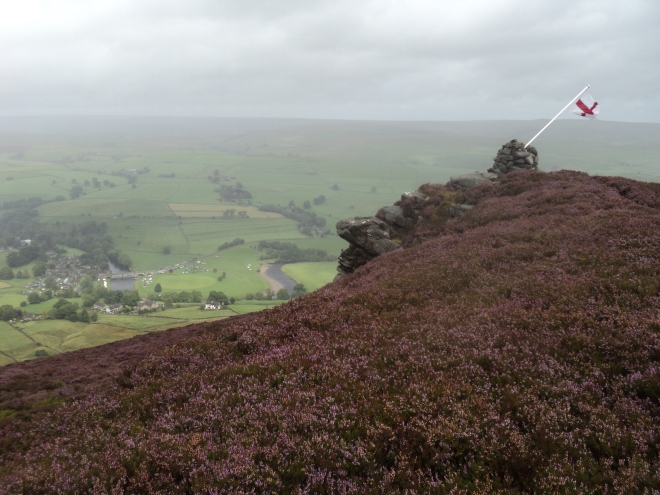