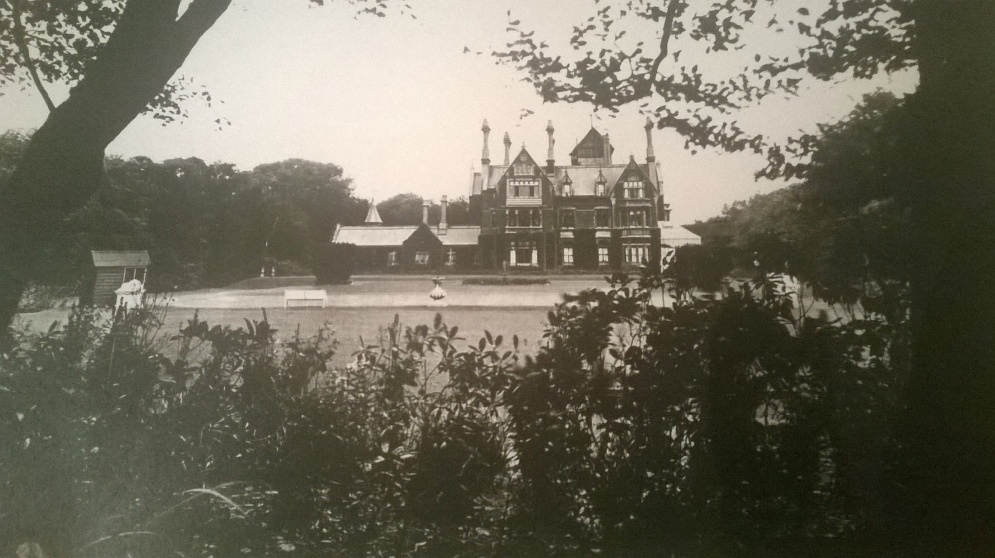 Here are some clues. The photo was taken in 1920 and the bowling green in the foreground, with its shed, bench and decorative flower pot, is now occupied by flats. And because of this, it’s not possible to take a photo from the same location today. Here’s the nearest possible equivalent: 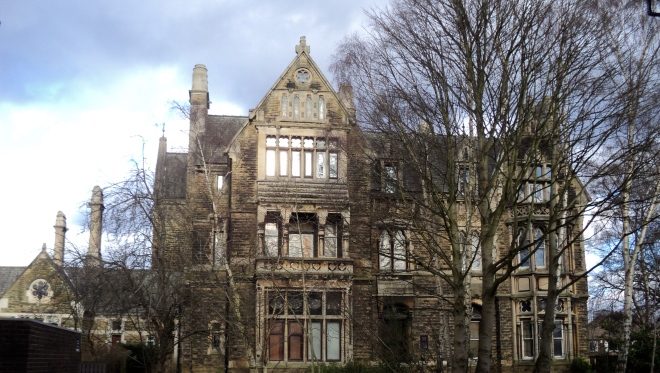 Of course, this is Meanwood Towers, one of the most eccentric-looking buildings in the area. I came across the 1920 photo last year during a visit to West Yorkshire Archive Service (who have kindly confirmed that the photo can be published) and the comparison between then and now is fascinating. The building itself has altered slightly with some of the taller chimneys and the top tower removed for safety reasons many years ago. But what is most striking is how the Towers stood alone from any other buildings in 1920 – indeed the photo is taken from a “sales particulars” document designed to attract potential buyers of the Towers and surrounding estate. Now, the Towers are hemmed in by housing and the view above is obscured in summer when the trees are in leaf.

I find this a pretty good example of why local history can be so interesting – things we take for granted today were not always the same way. It’s worthwhile from time to time browsing the terrific Leodis photographic archive of Leeds and seeing how places across the city have changed over the years. Search using the keyword Meanwood Towers to see the existing old photos of the Towers on the site – I will ask for the 1920 photo to be added.

There is one outstanding mystery about Meanwood Towers if anyone can help. When originally built by Thomas Kennedy in the 19th century, alongside the main building was a separate 800-seat concert hall, 40 yards from the front door. Kennedy had built this to house a church organ for his wife, specially-commissioned from the Schulze organ builders in Germany; sadly, shortly after the organ was installed she fell ill and was unable to play the instrument. The organ was put up for sale and eventually ended up at St Bartholomew’s Church, Armley, where it remains to this day. Now I’m not really a great appreciator of church organ music (I’m more of a Springsteen man myself) but the literature suggests that the quality of the workmanship and its setting in St Bart’s makes the Armley Schulze Organ one of the best-regarded of all such instruments.

Which is all quite remarkable given that it began life 150 years ago in a dedicated 800-seat venue on a site now occupied by suburban housing on Towers Way in Meanwood. The organ house was built of wood and with the organ gone it slowly became dilapidated, and maps of the area indicate that it was finally removed in the 1940s. I’ve never found a photograph of the organ house (unfortunately there wasn’t one in the 1920 sales particulars) so does anyone have one they are willing to share?

3 thoughts on “Recognise this Meanwood building?”