Just picking up the diary format where my previous blog on fellrunning over the August Bank Holiday weekend left off.

A drive over the tops to Muker in Swaledale. A very well attended and diverse Show. A walk round the course, exchanging notes with Pete and Ian from Keighley. Race at 4pm. A mad dash across the fields, straight through the river, steeply up the fell, a bit along the top and diagonally down. No tiptoeing on the return through the river – ploughed straight across. And back through the cheering crowds. Brilliant. Pleased to come 11th out of 68 in 14.11.

A slightly mad compulsion had me racing back across Buttertubs and down Wharfedale to get to the Ilkley Incline for 7pm. Don’t think I’ve ever done 2 races in the same day before, let alone within 3 hours! But Muker + Incline had a combined distance of 2.5 miles, so thought I could manage it. All about knowing the course this one and pacing things right (which I slightly failed to do). 27th out of 77 in 9.42 – hope to do a bit better in future. A nice meet-up and warm-down jog with fellow Valley Striders Amanda, Graham and Rachel.

A drizzly Bradley Show, a race I’ve enjoyed the last 2 years. More a gradual up and down than a short/sharp fell race but fun nonetheless, and a nice Show. Weather a bit grotty on top but you’re not up there for long. 11th (again!) out of 70 in 28.35, so the quickest I’ve done it. And a complete rarity – a photo of me smiling at the finish!

First day of long-weekend trip to Scotland. Drove from Leeds to Inverness. Stopped off en route at Alva, to recce the route of July’s famous race up and down Wee Torry. Fantastically steep. But mainly grassy, so no doubt quite a spectacle watching the descent-kings come down. In two minds whether it’s for me though!

Amused that in the distance you can just see the Wallace Monument, which commemorates one of the most devastating examples of downhill running in history – the Scots’ charge from Abbey Craig to annihilate the English at the Battle of Stirling Bridge in 1297.

First visit to Torridon. Parked near to Torridon House and jogged up the glen in front of Beinn Alligin, behind Liathach and up to Coire Mhic Fhearchair behind Beinn Eighe. As all the guidebooks say, impressive stuff, and clearly none of the peaks are to be trifled with. So I was glad to be where I was, but it felt like a useful introduction to the area. Returned the same way. About 10 miles, 3 hours or so.

Stac Pollaidh. Bloody hell. See previous blog. Note – not really a “run”, but when it came to the scrambling it was useful to be in fell shoes with just a light pack.

On the return home, detoured to Rosthwaite in Borrowdale to run the Dale Head race. Had a bit of “history” to address here, as when I did it last year my shoe collapsed coming off the top and I had to come down basically on one leg. This year a bit different anyway as we started by the Shepherd’s Meet field and the river was too swollen for a “herd of wildebeest” crossing. So, overall about half a km longer. Pleased then to run it in 65.24 – quicker than last year – and come 12th out of 35. Thorough course knowledge brings its rewards here, and unfortunately I picked a rather rocky line off the top. All good for the memory bank though.

After the adventures of the previous week, a return to the humbler surroundings of Eccup Reservoir. But these quarterly Valley Striders “round the res” handicaps are good fun social events, particularly in tonight’s fading light. 33.32 for the 5 miles.

In a similar vein, joined the Striders’ Thursday night group from Scotthall. This time it was the heavy rain that enlivened 7 miles on the road.

Up to Kettlewell for the Great Whernside race. A steady climb and a fast descent, the second half of which (from Hag Dike to the finish) is about as much fun as you’re likely to have fellrunning, being steep (but not too steep) and grassy – you can really let go. Also very nice to bump into fellow Striders Steve and Sara, who I’d not seen for ages. 26th out of 126 in 38.24.

Drove out to Holme Chapel between Todmorden and Burnley to recce the Thieveley Pike route – a new race to me. Felt good to get my bearings, see where the ups and downs are and check a few minor details. Hope this will help on Saturday’s race. 4 miles.

Ran up Meanwood Valley to Emmerdale and back – 10 miles or so. The ground still frustratingly hard – had me pining for the bogs on Haworth Moor etc. Interesting to note that the Emmerdale set now finally appears on OS maps, after years of “cartographic license”.

Thieveley Pike race. The recce proved its worth as climb paced sensibly, leaving plenty in reserve for a fast descent – picked up 8 places. Also had to chuckle to see many struggle over a gate when there is a far simpler – but difficult to spot – stile to the left. If only we had time to recce every race! 21st out of 165 in 38.13. 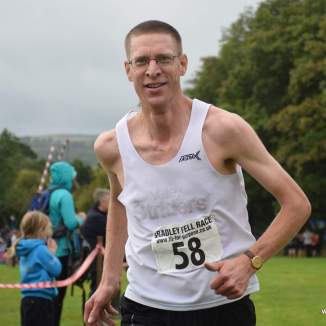 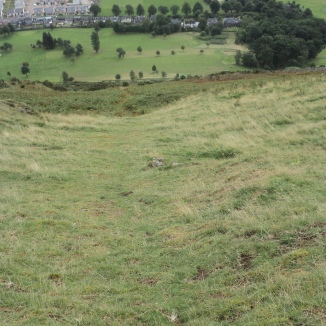 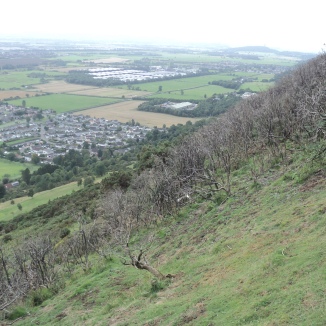 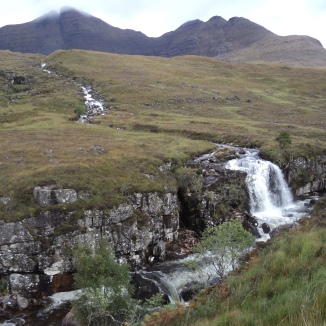 The Horns of Alligin

One thought on “Running diary – Sept 18”