“This upside-down, inside-out version of running where the streets and roads are just passing distractions in a search for those places where the running is dirty and uneven, where the world’s natural disorder sparkles and rushes, bends and cracks. Running without blinkers on”.

One of my New Year Resolutions this year was to enter the Leeds Half-Marathon. So back in early Jan I filled in the entry form, paid my £34 (!) and the clock is now ticking to May the 14th.

Not that I’m a massive fan of road running, particularly not 13 miles of it. I did some 10ks a few years ago, but generally I prefer to get off the roads and onto the trails and hills. So why the Resolution?

We live pretty much on the Half-Marathon route, and on every second Sunday in May the road is closed for a couple of hours in the morning. So it’s always seemed rather churlish not to stand on the pavement, witness the spectacle of 10,000 people going past and give encouragement. I’ve done this for many years now and each year I’ve felt a bit more like participating, rather than just spectating. Finally, this year, it was time to give it a go.

It was only after entering that I actually began thinking about what preparing for and running a half-marathon entailed. Conventionally, several weeks of running on the roads in advance. And then the big day itself – 2 hours of plod, plod, plod along the streets (and that’s presuming all goes well). The prospect wasn’t exactly grabbing me.

But I’m glad to say I’ve rediscovered my enthusiasm. For this I have a couple of books to thank (and Leeds Libraries for having them in stock!) – both similarly-titled and on a similar theme: Running Free by Richard Askwith and Run Wild by Boff Whalley.

The key message of both books is simply that running should, more than anything else, be about fun and adventure. Not about watching the clock, shaving seconds off your PB or about doing something you somehow feel you should be doing. Rather, it should just be about enjoyment, the sheer pleasure that comes from getting out there and running about, much as we did as kids.

So, I’m now seeing preparing for the Half-Marathon as an opportunity to return to the kind of running I like doing best – off-road, up and down, through woods, fields, mud and streams. Fortunately, we have a natural playground on our doorstep in Meanwood – the Meanwood Valley – and I’ve been making the most of what the valley has to offer.

Actually, just recently, it’s been a whole lot of mud, particularly the stretch north of the ring road through Adel Woods. It’s been great not to be put off by the cut-up paths and puddles, if anything to seek them out. In fact, winter muddy running feels like yet another great discovery about the Meanwood Valley. Good job I’ve got an outside tap at home though!

So do take a read of the books if you can. The quote at the top is taken from Ch.31 of Boff’s book, describing a run he took up Meanwood Valley in 1986. I’m glad to say it’s still like that now.

As to 14 May itself, fingers crossed the preparation will allow me to enjoy it the best I can. But already I’ve got a feeling it’s going to be both my first and last half-marathon. 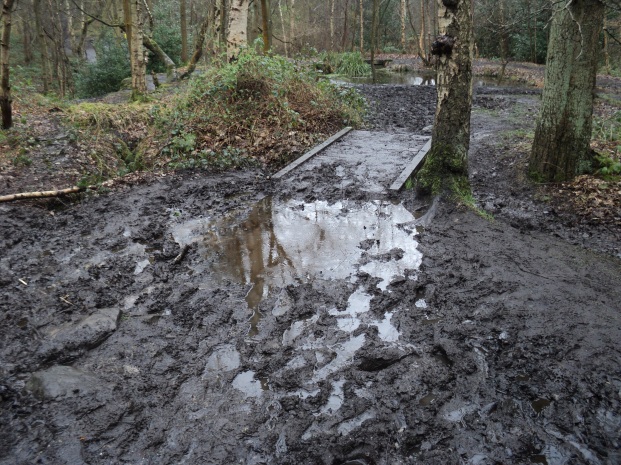