There’s an emerging theme elsewhere on this site about my growing disenchantment with elite sport. While this stems from an ongoing planning battle in Leeds where Green Belt may be sacrificed for the purposes of redeveloping Headingley Stadium, it’s actually a general trend I’ve noticed. Footballers can certainly conjure up great matches, but we’re all aware of the ridiculous salaries. What substances are OK for the endurance athletes – runners, cyclists etc – to take or not to take? And while I understand that the golf at last week’s Ryder Cup was of an exceptional standard, I didn’t see it – the ugly, vulgar crowds put me right off from the start.

This is all particularly the case in Leeds where the City Council appears to have been dazzled by hosting the 2014 Tour de France Grand Depart and now can’t get enough of elite sport. Tour de Yorkshire, Olympic Parade, ITU Triathlon etc. Without fully appreciating that it may come at a cost. For the Triathlon earlier in the summer, we were boxed in our cul-de-sac for half a day so that 30 or so elite men and women could cycle down the main road once – 4 hours of road closure for 4 minutes of action. And now we might not be able to jog around our bit of the Meanwood Valley because they want it to redevelop Headingley – it’s just the latest in a long line…..

Meanwhile, I’ve been very happy to be dipping my toe back into a grassroots sport that I was taking pretty seriously 10 years or so ago – fellrunning. The appeal of this admittedly slightly eccentric sport has already been brilliantly described at length in Richard Askwith’s book “Feet in the Clouds”, which I fully recommend to all. A general theme to take from the book is that there is potentially as much appeal and interest in a local, down-to-earth scene like fellrunning as there is in the self-important and commercialised world of elite sport, which we all pay vast sums to Sky, BT etc to watch.

I was reminded of this the other week, lining up for my first fellrace for several years at Burnsall, in the Yorkshire Dales. Just a quick look round the field of 100 or so, I recognised a few faces, not because I knew them personally but because they are the “stars” of the sport. By stars I mean just very competent at what they do, well known on the circuit, with great results and records behind them. But their reasons for being there are just the same as mine – not for any money or glory, it’s just great fun to do. With the greatest respect to Mo Farah (whom I admire), I’m not likely to ever actually rub shoulders with him on a startline anywhere. 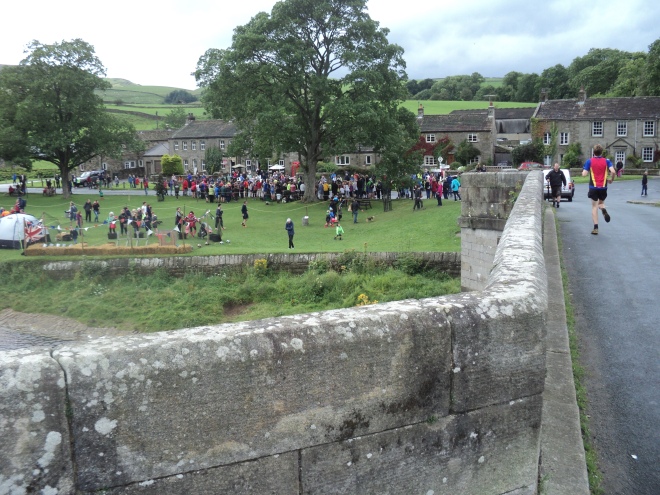 Burnsall was a great race to start again with. An idyllic scene, a race history that goes back to the 19th Century, and a great fellrunning challenge. Basically, you start on the village green, run through a gate and then go up through steep fields to the open fell. At this point the route narrows to a thin track up through the heather to the cairn, 800 feet above the village. When you go for a walk up a hill, one of the things that gets you to the top is the thought of a well-earned rest, a snack and a drink, taking in the view etc. Not with fellrunning. All that effort and within a split second you’re hurtling back down where you’ve come. This is particularly true of Burnsall, where the first half of the descent is so steep you have to put the brakes on to stay on your feet. You then jump a dry-stone wall (which is 6ft high as you approach it, but 9ft down on the other side!) and into the fields. The gradient here is slightly less steep and you can really fly down it, which accounts for the buzz of endorphins that sustain you over the finish line and for long after. Absolutely bloody exhausting, but so worth it.

Elite sport likes its stats but you can get into the stats of fellrunning too. The men’s record at Burnsall is 12.48, set over 30 years ago. Why hasn’t it been broken in all that time? In fact, if you look at the recent winners’ times they’ve actually been getting slower. Could it be that there is a competing event that attracts the top athletes? Is the heather longer now than it used to be? (it can really slow you down, particularly on the descent). Tantalisingly, the race programme reveals that the record ascent time is 8.22, and the record descent is 3.40, meaning that theoretically a 12 minute time is possible!

For me though, I took twice as long. Who cares though? It was just good to be back. 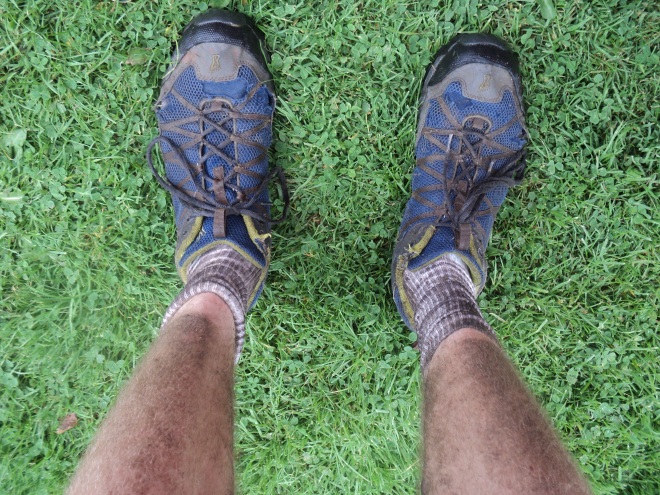 One thought on “The appeal of grassroots sport”