Last Saturday morning was the first meet-up of a new group – the Friends of Meanwood Park  – and it was great to go along and get stuck in to some serious legwork for a couple of hours for the sake of our local park.

This first session was advertised as a chance to “do various jobs including unblocking the mill race (muddy!) and remove invasive plants (muddy!)”, and it didn’t disappoint. The 15 or so of us that came along were soon busy in and around the duckpond in the American Garden. Before long we experienced the peculiar satisfaction that comes from unblocking stagnant water, by clearing out the silted-up outflow from the pond and releasing a rush of water down the mill race.  Listen carefully and there is now a faint, and soothing, tinkling sound as you walk over the bridge.

We then turned our attention to tackling the invasive species that had become prevalent around the pond – American Skunk Cabbage. That’s the yellow plant below:

You can find out more about this plant and why it needs removing here (there is also another blog on this site about invasive species in general). Needless to say, the various specimens dotted around the pond weren’t always conveniently located, and I had a particularly adventurous excursion at the end of a little promontory into the pond to get at the final few. But eventually we were satisfied that the pond was a skunk-cabbage-free zone and hopefully it will stay that way!

Meanwhile a few of the group concentrated on clearing holly around the stone footbridge over the beck, and there is now clear daylight where previously just a spiky passage. A bit of tidying up and that was your lot for the couple of hours, but very satisfying to be able to notice a real difference in just that short time. If you’re around the duckpond/American Garden in the next few weeks, I hope you agree.

Many thanks to the LCC Ranger Steve who gave the group a hand, giving us a timely reminder of some of the health and safety issues before we got stuck in, as well as providing the tools and, crucially, the tea and biscuits! 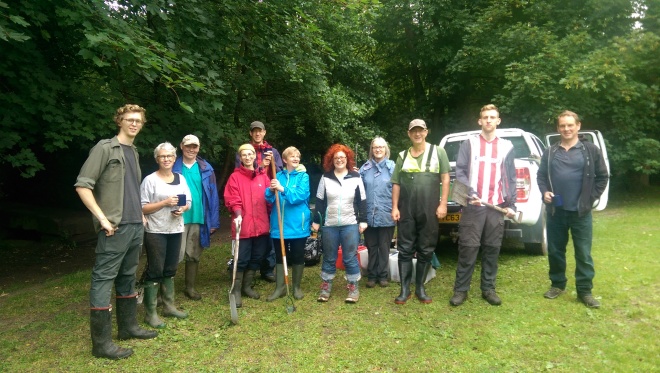 The next two meet-ups of the group are on Saturdays 19 August and 16 September, both from 10am to midday, from the car park at the end of Green Road. Wear suitable work clothes and boots but tools, wellies and gloves will be provided. If you like doing something practical and outdoors for your local park, and meeting some like-minded people, then I really recommend it.