I first starting blogging about Tetley Field back in February, and since May I’ve been doing my bit for the Save Tetley Field campaign, as it’s been christened. It’s been something of a rollercoaster 6 months and now, in early August, a decision on the 3 planning applications seems to be getting closer.

I guess it’s only natural to mentally prepare yourself for the outcome of any big decision, whether it goes one way or another. And it would be easy for residents of Meanwood and Weetwood to feel rather pessimistic about things just now. Only last week Leeds City Council, the body that will decide the planning applications, gifted Yorkshire County Cricket Club £4million, no strings attached, for the Headingley Stadium redevelopment project. And back on 5 July, both Leeds Rugby and Yorkshire CCC sent out misleading messages to their members and the wider public, attracting comments in support of the applications as a result. It would be understandable to think that the “the powers that be” may have their way.

But in fact there is plenty for local people to be positive about. The Save Tetley Field campaign has made a strong planning case in opposition to the Green Belt applications. And regardless of the outcome of the planning decision, there is more about the campaign for people to be proud of and celebrate. The campaign has been a first class example of effective community action – since May, in addition to submitting its formal representation, the campaign has also achieved the following:

In conclusion, the campaign has stood up for our community and brought it together. It has clearly demonstrated our passion and attachment to the area and our public spaces. It has run a civilised, well-argued and well-organised campaign. In short, it has done Weetwood, Meanwood and indeed the city as a whole proud. We should feel entitled to celebrate what we have achieved! 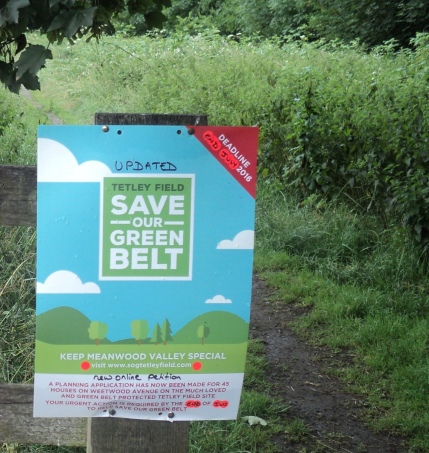