I’ve enjoyed a number of walks already this summer around various Nature Reserves within the Leeds city boundaries. I’ll highlight 3 examples here, all managed by charities, and all good examples of how to create valuable open space in the city for the benefit of local people, landowners, and wildlife too!

All 3 walks here are suitable for families with children, and parking is available at 2 of them. Note that the nearest parking to Adel Dam is at either of the car parks for Golden Acre Park; also, dogs are not allowed at Adel Dam.

I visited here for the first time last week, and what a great oasis of calm and beauty in otherwise unpromising surroundings! The entrance point by the parking place at the end of Redcote Lane is not the most salubrious spot and initially you walk next to the railway line. But once you are on the meadows all that feels miles away, and you could easily be forgiven for thinking you were many more than 2 miles from the city centre, as I hope the following photos show: 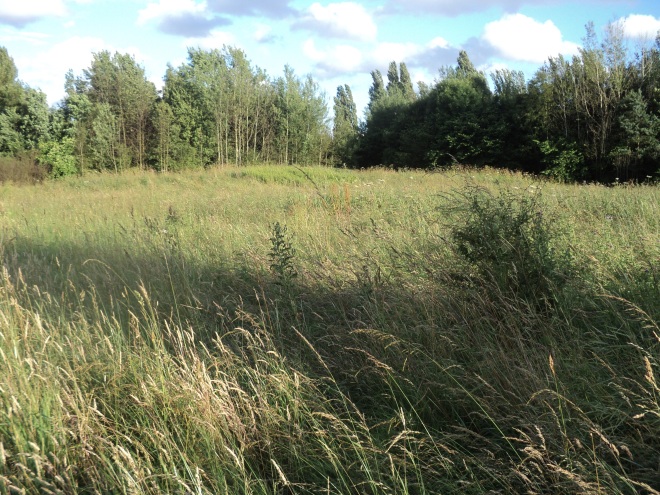 The reserve is managed with a very light touch by Yorkshire Wildlife Trust, with not much more than just a few made paths and benches plus the entrance gates to remind you that you’re on a managed site at all (the meadows are cut in late summer and the woodland thinned in winter). A very pleasant round walk of around half an hour in total, although you may want to linger longer than that.

Another Yorkshire Wildlife Trust reserve (this one is owned as well as managed by them), Adel Dam is a small woodland surrounding a lake with a couple of hides for bird-spotting. Here’s a view from one of them from last weekend (that grey spot in the distance is a heron, honest!): 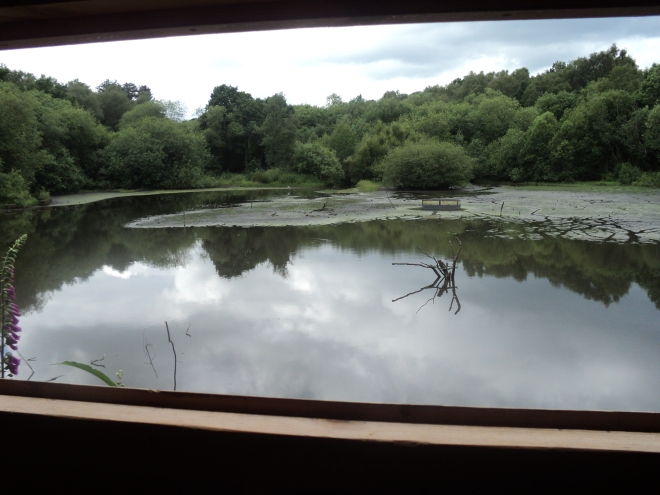 Like Kirkstall Valley, it’s a “one way in, one way out” circular walk of half an hour or so, although again there is a temptation to linger in the hides. Perhaps the most distinctive aspect of this reserve though is its proximity to Golden Acre Park; in fact you have to either walk through the park (or the along dividing bridleway) to access it. The contrast between the relative formality of the Council-owned park and the “managed wilderness” of the reserve is very pleasing. Older kids will like the reserve while their younger siblings feed the ducks in Golden Acre Lake.

Due to a neglected camera I don’t have any pictures of my own from either of my visits to Rodley Nature Reserve in 2016, but you don’t have to go very far on their website or Twitter to find plenty. Although opening times are restricted to 3 days a week, visitors are generally more actively encouraged here than the 2 previously-mentioned reserves (brown signs direct you to a car park, and there’s an informative visitor centre with cafe too). It’s much bigger as well, with more to see and more options for a longer walk/stay. The reserve is located right next to the River Aire and has a wetland character (quite literally after those floods back on Boxing Day, and many congrats to their dedicated volunteers who have done such an amazing clean-up job since then).

The reserve is on the site of Yorkshire Water’s decommissioned Rodley Water Treatment Works, and is managed on a 60-year lease from the company by an independent registered charity – Rodley Nature Reserve Trust (charity no. 1070744) – established for the purpose. Clearly the beneficiaries of this arrangement are not just the birds and the public, but Yorkshire Water themselves, who are widely seen to be so closely associated with one of Leeds’ most appealing environmental attractions.

If anyone would like to recommend any other good nature reserves to visit in Leeds, please use the Comments box below.